Please also visit the brilliant and fascinating new Drill Hall research website created by local historian Mary Walden-Till that is looking at the history of the building. Mary is working with a local architect on designs for the building and immediate area. These plans will be published here and on Mary’s website soon.

In 1895, Mr George G Radford donated a piece of land near the Ham, Sidmouth, Devon for a new building to be built. This was to be called ‘The Drill Hall’. Mr & Mrs R Hatton-Wood of ‘Belmont’ advanced money for the building work, £1,650.

Sidmouth Drill Hall is located at the far eastern end of Sidmouth seafront beyond the Port Royal sailing and sea angling club, and before Alma Bridge.

The main hall is 60 feet long by 30 feet wide, and 18 feet high. In the basement there are roomy stores, a firing range and dressing rooms. The upper portion of the hall originally contained a subscription reading room which was open to visitors. In the gable, over the entrance doors, was a clock supplied by Mr Passmore; a watch and clock-maker with a shop in the High Street.

The building was opened on 15th October 1895 where 172 people dined in the main hall and the Volunteers headed by their main band paraded through the streets of Sidmouth.

The Drill Hall was used by the Volunteers and enjoyed a range of uses for 100 years.

The building was closed and boarded up in 1994 and has remained that way ever since.

At a meeting of East Devon District Council’s cabinet in November 2011, council members approved a motion that the building be demolished and a car park built on the vacant site.

The cabinet allocated a budget of £48,038 to demolish the building.

A local campaign group was formed and in March 2013 EDDC removed their plans for demolition.

In November 2012, Sidmouth Drill Hall Hub gained access to the building and took the following photos. We were accompanied by a surveyor who gave us assurance that the building is in sound structural health and would require only superficial repairs.

The photos allowed us to contract an architectural designer to create the designs you will see on this site for a vision for a regenerated Drill Hall.

Further research has been carried out on the history of the building leading us to find early images including this which was taken 10 years after it was built. It shows iron railings supporting a terrace around the building with french windows leading onto it. The approach to the Ham and Alma Bridge was in keeping with the build with lantern lights and railings continuing from the Drill Hall. It was recognised at the time as a stand out piece of architecture. The Drill Hall was designed by renowned local architect James Jerman.

Since 2013 we have continued to request to East Devon District Council that we might gain access to the Drill Hall for a sustained period in order to be able to develop a full business plan for restoration and development of the building as a working asset for Sidmouth. All requests continue to be declined.

As part of the TourFish project a consultant was commissioned to write an Economic Evidence report on the Drill Hall. You can download that report here SDH report FINAL 13 May 2015 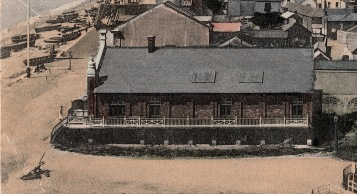 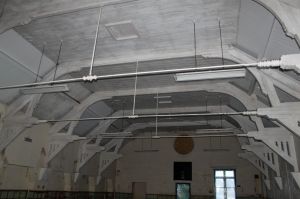 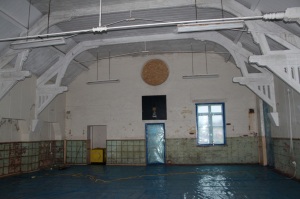 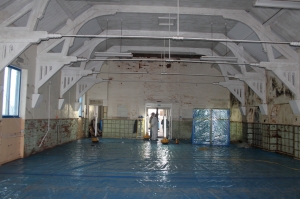 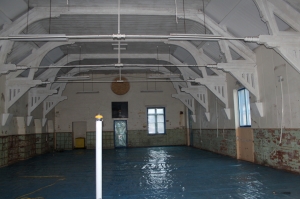